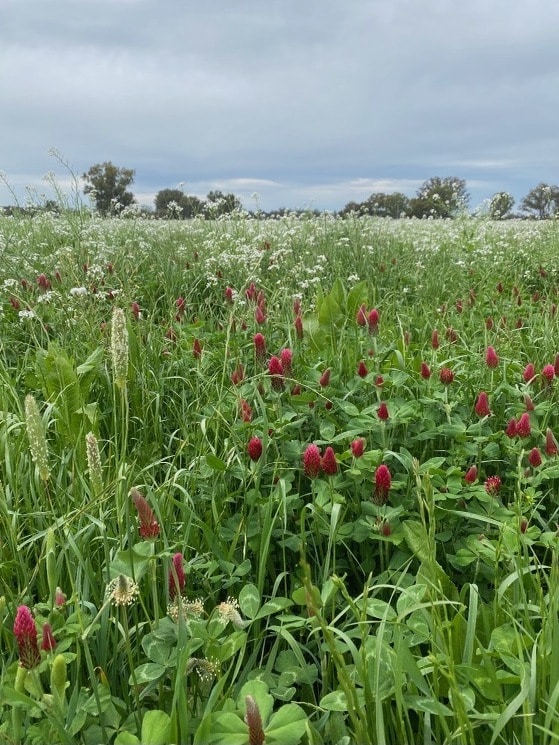 For some farmers, the idea of regenerative farming practices is overwhelming at best, and is often seen as posing a risk to the profitability, productivity and efficiency of the business. For Zac Rowlandson, when it came to scaling up the family farm, it seemed like the logical next step.

“I approached the farm as a business, coming from a commercial operations background, and I couldn’t accept the level of risk for the return with conventional systems.”

Zac researched the world of regenerative farming widely. He learned about worm liquid from Re-Gen Farming and was converted to compost making after a conversation with staff at Camperdown Compost. He read the work of regenerative rancher Gabe Brown and picked up tips from the team at NutriSoil.

“Soils for Life, with its case studies, was probably the biggest resource back in the day, and a system called Natural Intelligence Farming really resonated with us,” Zac says. “It focuses on the mindset of making changes to stop fighting against nature, using your intuition and the connection with the land to farm. We have lost that over the last 40 or 50 years with full-on synthetic systems.”

Starting from the soil up

“We changed the focus with soils and the farm as a priority rather than the animals, and that just changed the way we made decisions,” Zac says.

“I went on this journey to learn how to make compost,” he recalls. “That is probably one of the most enjoyable things that I’ve done in ag, to be able to make something and then apply it and see the benefits. You’re encouraging growth instead of trying to implement your control by spraying chemicals that will kill things.”

Zac also used grazing management to improve soils and pastures. “We changed to high-density grazing or timed grazing, moving stock around. It was another thing where I thought there were way too many headaches, and most of the problems I had anxiety about didn’t happen,” he says.

“In some cases, that’s allowed us to triple our stocking rate without any other inputs. I’d say that’s the most powerful tool for anyone who has livestock.”

Adopting regenerative practices has led to a huge reduction in inputs. When the family company, Super Natural Farms, took on a broadacre property in Forbes, they used livestock – not chemicals – to improve the land.

“People told us we couldn’t do it at Forbes, in the cropping country. That farm’s now been running 16,000 DSE for the last 12 months, which is well above the stocking load we thought it could do,” Zac explains.

He recalls consultants putting pressure on him to fertilise: “I started to ask the question, ‘Well, what happens if we don’t?’ And they said it would fail. That was the first year of the drought, and we didn’t fertilise, and it probably would’ve sent us broke if we did.”

“That taught us that we could get away without all the inputs. We came out of the drought and grew good average crops for the district without any in-crop sprays.”

“The agronomist said, ‘If you don’t spray these weeds, you’ll go broke,’ but we just didn’t do it.” Seed banks that experts warned Zac about haven’t caused problems. “If you treat the soil badly, those weeds will come back, and if you treat it well, they don’t grow; if you create the right conditions for the plants you want to grow, you won’t have the issues.”

Soils are improving, livestock are performing, and input costs are diving. “The chemical bill the first year out there was set to be $220,000, and the last few years, it’s been about $10,000, Zac says. “You don’t have to be real smart to work out where most of the profit comes from.”

As well as looking after the family business, Zac is CEO of Bettergrow. He uses the same regenerative practices at the company’s Warragundi Aggregation in the Central Tablelands region of New South Wales. The process has been made easier thanks to the adoption of AgriWebb.

Cattle moves are recorded in real time, making it easier to track them through paddocks and across multiple properties. Users can look at the farm map on their mobile and know precisely where the mobs are grazing. Even better, AgriWebb automatically estimates each paddock’s grazing days remaining.

“Directors who are remote can look on AgriWebb, and the anxiety about running out of feed goes away because you can see what you’ve got in front of you.”

Thanks to AgriWebb’s integration with Cibolabs, Zac has even more confidence in his fodder stocks. Cibolabs uses remote sensing and machine learning combined with on-farm knowledge to bring greater insights into pasture productivity.

“When we got Cibolabs, that was another layer we could look at, and compare our feed on offer to what we assumed it was from driving around the farm,” he says. “It’s a good indication – if a paddock’s bright green, I know we’ve got feed up our sleeve. We’re not pushing the limit all the time.”

Beyond providing a clear view of the present, AgriWebb makes future challenges easier to navigate. Trustworthy records can be retrieved instantly, providing perspective on the current situation. “I can go back and look at paddocks in previous years and know exactly what they’ve done. We know what to expect for our stocking rate, and little things like that are critical,” Zac says.

These insights lead directly to more profitable management decisions. “It means you don’t make silly decisions in trading or offloading cattle,” Zac explains. “Through this winter, the cattle market dipped and we were tight, but we knew we’d get through. In the system we used to run, we would’ve sold because we would’ve feared running out of feed – without AgriWebb, you don’t have that ability to judge it so clearly.”

AgriWebb is proving crucial for Bettergrow’s long-term plans, making it easier to take on carbon projects with the Carbon Farming Foundation in Western Australia.

AgriWebb’s map-based interface is particularly helpful. “We have different map layers to manage those carbon projects,” Zac says. “The guys on the ground have got the information and can see where the different areas are and how to manage them.”

Zac sees the soil carbon projects as a way to be rewarded for good work he is already doing. “All the things people say you need to do to grow carbon, were all the things we were trying to do to grow productivity and soil health,” he says.

AgriWebb is also increasingly important for raising and investing capital. “Now with bank valuations, we’re asked for AgriWebb files because they get a rolling view of what we’re doing. And we are able to prove that we’re not just putting on a good front for valuation,” Zac says.

“It’s really good for producers to have those records because when we’ve gone to buy farms, the more reliable the records are, the higher the value we place on the farm.”

To find out how AgriWebb puts the future of your farm business in the palm of your hand, get in touch for a free demo today.