🌐 A journey from ag to tech, to agtech 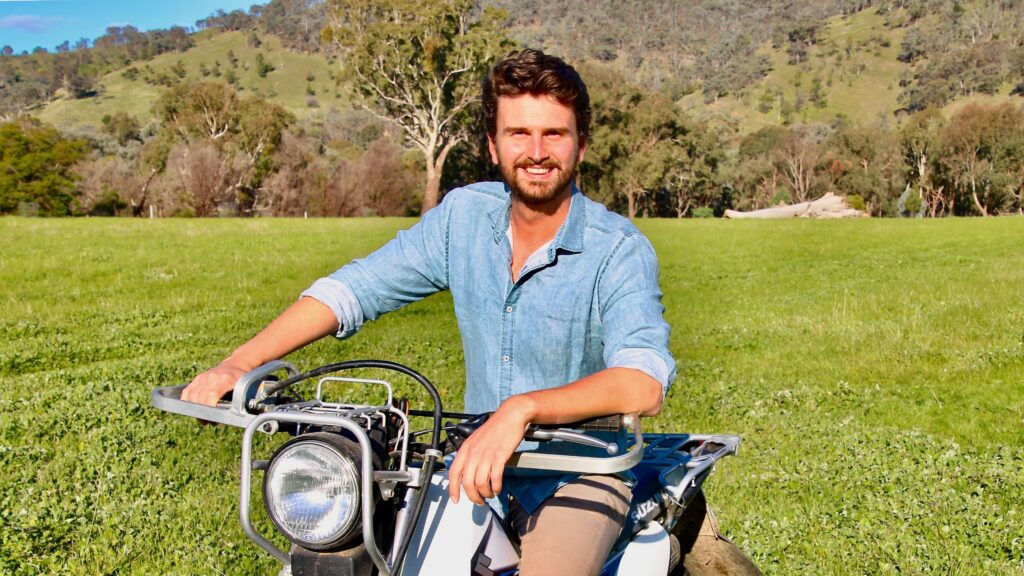 An early start in agribusiness

From trading cattle as a teenager to organising tech conferences in Europe, Josh Collins’ broad range of experience makes him well suited to serve as AgriWebb’s Head of Account Management, helping clients to achieve their business goals.

Josh has been back on the family farm recently, working remotely on account of COVID-19. It’s winter, and the 1000-acre property at the foot of the Baranduda Ranges, in North East Victoria, is thriving after good autumn rains. “In the summertime, it’s bone dry here,” Josh says. “In the wintertime, it’s a lush, beautiful landscape. In the paddocks, the grass is up to my knees.”

From as early as he can remember, Josh helped out on the family farm and wanted to be involved in agriculture. When other 14-year-olds were working part-time at McDonald’s, he and a friend borrowed $5,000 to start their own business trading cattle.

After classes, Josh would ride his dirt bike down the road to check on their herd, which grew to more than 100. When he and his friend closed up the business, their after-school hobby netted them $100,000.

At the centre of the startup world

The money from his cattle-trading business helped pay for Josh’s university fees. He earned a degree in Commerce, and then further studies took him to Europe. In Dublin, Ireland, he took on a job with Web Summit, helping to organise one of the world’s largest technology conferences.

Web Summit brought thousands of startups together, connecting them with investors. At one of its conferences, Josh met John Fargher, the co-founder of AgriWebb, who was pitching the then-fledgling company. At the time, Josh discussed using AgriWebb on the farm back in Australia.

It was Josh’s love of the family farm that drew him home after four years abroad. “My earliest memories are of riding horses with dad, mustering stock,” he says. “I wanted to be able to fly home on the weekend and get out on the motorbike, chasing livestock – I wanted to be closer to agriculture.”

Before he left Europe, Josh gave John Fargher a call. “We spoke on a Wednesday or a Thursday,” he recalls. “By Monday morning, I was in Sydney for a catch-up. The following week I started at AgriWebb full time – that was over three years ago.”

In the past, Josh had worked with startups whose goals could be a little out there – think putting satellites on Mars. It was refreshing to join a company making a difference in the here and now.

“We’re solving a problem people I grew up with had, and it’s an age-old problem, around farm record keeping” he says. “You actually have an impact on somebody’s day-to-day life and the industry’s overall success.”

He also appreciates the mix of skills within AgriWebb. “You’ve got 15 to 20 engineers, passionate about their work, and agriculture is a whole new world for them,” he says. “They come with an open mind, and there’s no bias.

“Often you get these ‘wow’ moments where it’s like, ‘I didn’t realise you could approach a problem that way, but that’s cool.’

“Then you point out, if you bring it to a farm application, a tonne-and-a-half bull is about to flatten you while you’re creating these records. They get an appreciation of how robust the product really needs to be in how simplified it needs to be.

“That’s the most special part of the work, and it’s where creativity comes into play – worlds collide to create a product which ultimately services our customers.”

If you’re interested in following Josh’s journey with AgriWebb, you can connect at LinkedIn.