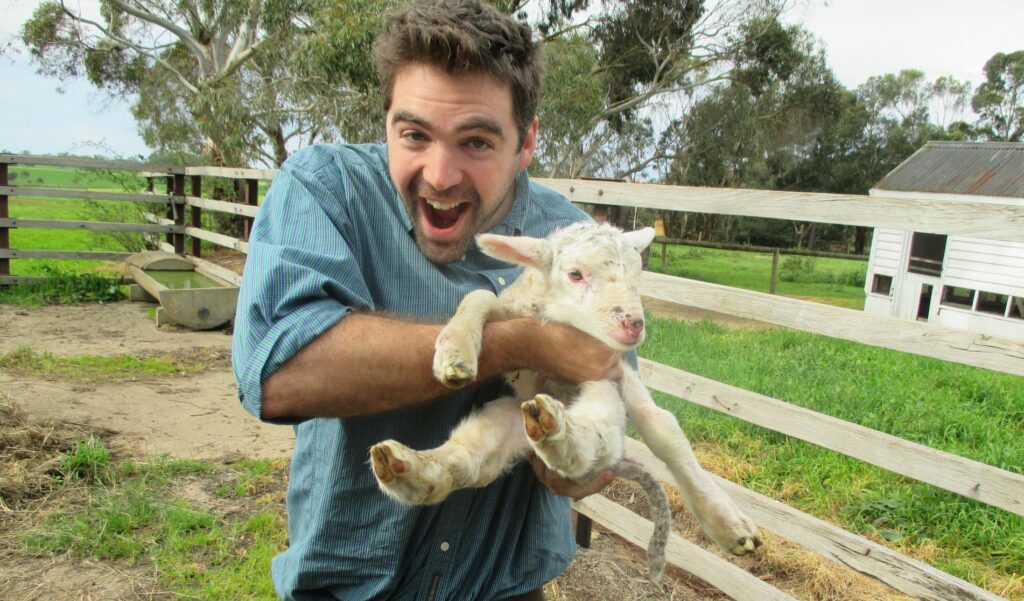 In many ways Kevin Baum, co-founder of AgriWebb, might seem an unlikely fit for a leader in the agriculture industry. Up until 10 years ago Kevin had spent almost no time outside of major cities, and had little contact with the agriculture industry. But what he has always had, and still holds onto today, is a passion for finding solutions to big picture problems. With sustainable food production being one of the biggest problems our generation is facing, in his words, “agriculture just seemed like a good fit”.

Kevin spent his childhood living in Washington DC. He then went to university first at Stanford, where he studied human biology, and later Oxford, where he completed his  degree in environmental science and his MBA. His time at Stanford was interesting as it was during the “dawn of the era of social media”, and he says that it inspired him to see people trying to create something from nothing. However he notes that he became somewhat disillusioned at the time, “while the innovative spirit and growth of these businesses was remarkable, something was missing. I wasn’t sure how helping people get addicted to clicks on the internet was really making the world a better place?”. It was at Oxford that he first met Justin Webb, fellow co-founder of AgriWebb, in 2011 whilst studying for his MBA. The pair were on the rowing team together, “we hit it off and drank beers together and I picked his brain about starting an organisation from the ground up”. Justin shared that he had noticed gaps in record-keeping back home on his family’s farm in Victoria, Australia, and was left frustrated when he went hunting for data that didn’t exist. Not too long after, Kevin went to visit Justin back in Australia. Having not spent much time on a farm before, Kevin was sent out to shadow the farm manager to get an idea of how an Aussie sheep and cattle station operated. He soon experienced the problems that Justin had addressed, and they realised that this was not a unique problem. Digitising farm management would have a huge impact in helping farmers simplify their management and improve their businesses around the world.

Kevin, as well as his fellow co-founders Justin Webb and John Fargher, both from farming backgrounds, realised that in addition to the core problem of helping farmers improve their businesses, digitising farming would help solve macro food problems as well: how do we produce more food, without using more land, and while keeping it sustainable for future generations? “There are three industries that make the world go round, infrastructure, energy, and agriculture”, says Kevin. “In five years we won’t be worried about Snap-chatting each other or who has more followers on our Instagram profiles, but we will always be worried about putting food on the table for our families. Our goal at AgriWebb is to ensure this is always possible”.

The road to now

It has been a long road to get AgriWebb to the place it is at today, thriving across three geographies, working with thousands of farmers, and managing tens of millions of head of livestock. Kevin recalls the farmer that kick-started it all back in 2015. “It was very early days, we had visited this one farmer about six times, and we headed out to his farm for what we thought was the final meeting before he purchased the product. This man was our first real advocate for AgriWebb. Myself and John had hyped ourselves up the entire three-hour journey to this customer’s farm in western Victoria. We were so fired up for our first ever sale. But when we arrived at the farm he was at the front gate waiting for us, which was unusual. He stopped us, and told us straight out that he didn’t think that AgriWebb was a good fit for his farm. We were completely devastated. We couldn’t believe it. We turned around and drove almost the entire way back to Melbourne in silence. Completely thanks to John’s strong character, he called early the next day and was stopped mid-sentence. The farmer said, “if people like me don’t invest in people like you, this industry will never change, and we need change”. He purchased AgriWebb and was our first ever customer”. Kevin says that the first thirty customers faced many challenges working through the kinks with a brand-new product, but that they stuck by AgriWebb because they believed in the same vision, “farmers make AgriWebb possible, we can’t do this without their belief in us”, he says.

So, what does a normal week look like for Kevin Baum? Well, as you might expect, Kevin’s day-to-day role is ever-changing. “There is no typical week for me, it all depends on the needs of the business at that particular time”. His most important job, he says, is to set up his employees for success. “We are constantly working to push the next big thing off the ground, striving to provide the best possible product to farmers”. Although Kevin comes across as a jack of all trades he makes it very clear that he couldn’t do it alone, “ Justin and John and I make an incredible co-founding team. We all bring something different, yet essential, to the table, and the same goes for all of the employees we have here”. Kevin says the strength of the AgriWebb team lies in the capability and passion of each of the individuals. “Everyone is truly passionate about what we stand for. They are all capable of anything, and the only reason they are at AgriWebb is because they feel that we are making a difference. At AgriWebb it doesn’t matter what industry you’ve come from, the unifying thread is belief in what we’re doing”.

Kevin remains positive about the future of agriculture and finds comfort in the fact he is making a difference to farmer’s lives, “every day I am working to help real people, and each day we are working together to solve the most fundamental problem humankind is facing. Working with authentic people, whose entire livelihoods is their farm makes it so much more important that we get it right”.

“If we can play a part in pushing the industry into a digital transformation we will be able to solve some big problems. Change has to happen in every industry, change is positive and should be embraced. I hope that we can be a leader in this space, and help people understand why agriculture and agtech are so important to a region’s identity”.