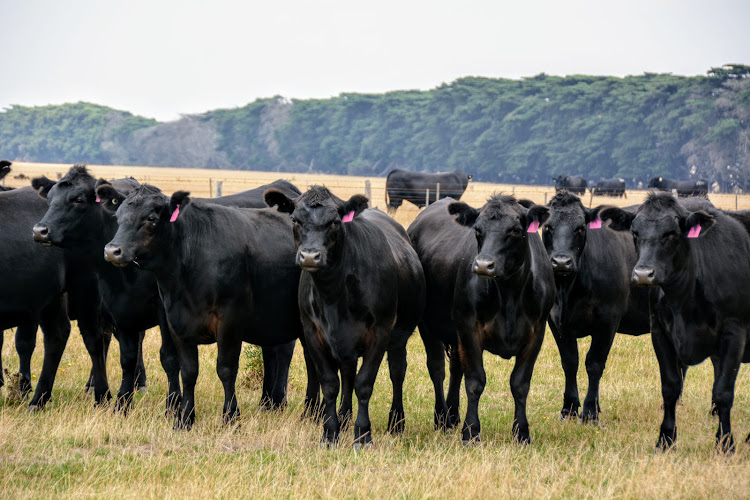 A lot of what the public hears about beef cattle is that they cause damage to the environment. And they live in feedlots in the US and Australia. We dig a bit deeper to fact check some of the things we hear in the media for the US, Australia and the UK.

In areas such as the UK, feedlots are not common practice, although feedlots have been increasing in parts of the country. However, in the US and Australia they are more common. And some people might assume that cattle in feedlots spend most of their life there.

In the US, UK and Australia, ranchers and farmers wean calves at 5-10 months once the calf’s digestive system is fully developed.

From there, in the US, many weaned calves are transferred to stocker operations, which are grass-based. Or they might go to a backgrounding operation that feeds weaned calves a combination of hay, small grains, silage and distiller grains.

Cattle are finished around 10-18 months in the US and around 95% are grain-finished. Those in feedlots eat a mixed diet of grain, hay and agricultural waste products.

In Australia about half of cattle are grain-finished and are usually ready for slaughter at 21  months. Some are finished in pasture around the 20 to 24 month mark. Similarly, UK farmers finish the majority of their cattle on grass around the age of 20 to 24 months. Just like their grass-based counterparts in Australia, cattle will take around three to four months longer to finish on a grass-based diet. Of course, some breeds finish at different rates.

Therefore in these regions, cattle spend the majority of their lives on pasture. Across the world, grasslands provide about half the feed eaten by livestock.

2 – Feedlots are better than grass-fed beef cattle as they finish quicker.

And cattle certainly contribute to climate change. Cattle are ruminants, meaning their digestive systems turn cellulose from grass and shrubs into energy through enteric fermentation. This produces methane. Methane is one of three major greenhouse gasses that warm the planet. The other two being carbon dioxide and nitrous oxide. Beyond the grazing stage of a cow’s life, feedlots emit not just methane from enteric fermentation but also both methane and nitrous oxide from fertilizer (used in feed crop systems), transportation fuels, and manure decomposition.

There are two types of greenhouse gas emissions.

Now, taking a step back, there are two types of GHG emissions. One type is naturally occurring, like methane emissions from wetlands or elk burps. These are not included in global GHG inventories and climate action targets. The second type is “anthropogenic” emissions that are derived from human activities—for example, burning fossil fuels.

Does it matter who eats the bison?

This all raises a key question: are a wild bison’s burps different from a domesticated bison’s burps? Does the fact that a bison is eaten by humans rather than a wolf change the emissions footprint? Whether it is a human eating a bison, for example, or a non-human predator, the result is the same.

But whether any bison’s burps contribute to climate change depends on two things: 1) if emissions are part of a natural cycle (cyclicality), or 2) the number of grazing animals on the land compared to the amount of forage being produced (pressure). In cyclicality, methane released within the rangeland is part of a natural cycle. Rangelands have well-established cyclical processes for reabsorbing emissions. When ruminants on rangelands emit methane, that methane breaks down within a decade into carbon dioxide. This is used by plants for photosynthesis and so recycled through the landscape.

Grazing livestock on pasture, on the other hand, also releases methane. Pasture does absorb the emissions of grazing ruminants, but only as far as photosynthesis keeps up. If livestock emissions outstrip the rate of photosynthesis, then emissions from pasture-raised livestock can contribute to climate change. In other words, overgrazing damages the land and worsens climate change. This is what has happened over the last 300 years.

Whether a ranch is climate warming or cooling depends on the density of livestock compared to the amount of grass available. Therefore, as livestock numbers increase in parts of the world–and as forests are cleared for pasture–these landscapes become climate warming.

In other parts of the world, such as Russia, central US, and Eastern Europe, there is sparser grazing and therefore many of these grazed landscapes are climate cooling.

4 – The answer to the climate challenge is to get rid of livestock.

These stories highlight an important trend. In many regions of the world, expansion of livestock grazing has caused significant land degradation. This includes soil erosion and biodiversity loss. In arid regions, heavy grazing has caused desertification, or loss of grassland to shrubs and bare ground. In more tropical regions, livestock grazing is also driving deforestation, particularly where forests are cleared for livestock pasture as in the Amazon.

What do we do with land if not graze it? Is that better for the environment?

In the US and the UK, economic and social pressures are driving farmers and ranchers to sell their lands. And they often sell to housing developers. In some cases, the land is converted to lucrative forms of intensive agriculture, like vineyards and fruit orchards.

Such conversion results in land degradation as ranches and farms are replaced with even more intensive land uses that drive soil erosion, eliminate habitat, and impact natural water systems. Research shows that the most promising approach to grasslands soil carbon – even more than rotational grazing or compost application – is just preventing land conversion, due to the emissions and soil carbon loss associated with the vegetation removal and erosion.

So what should we do?

Want to see more about how AgriWebb helps with sustainable farming practices? Find out here.

Any misconceptions you want us to fact-check or explore related to livestock farming?

Get in touch with us with your suggestion.