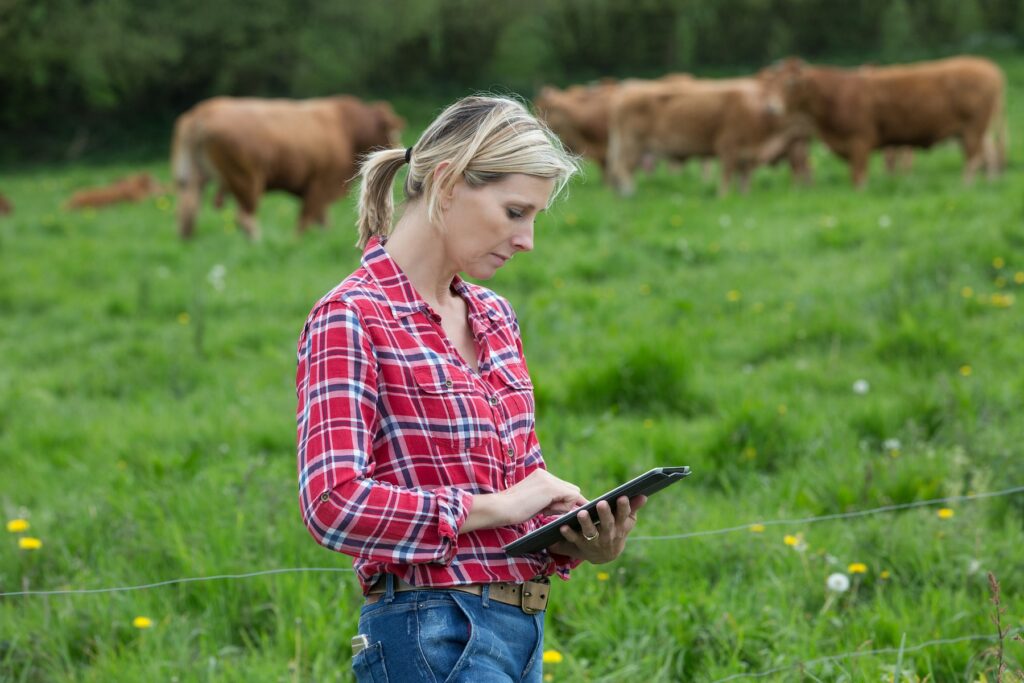 Once held back from studying agriculture, women are now making their mark across the industry.

In popular imagination, the story of Australian agriculture is one of resilient hardworking men, battling the elements to raise livestock and crops in an often harsh land.

It’s a fair sketch of life for Australian farmers but it skips over one important fact that we’re reminded of on International Women’s Day: a lot of those farmers are women.

“I’ve met so many amazing women who just keep trooping on. In terms of keeping a farm business going, if they aren’t right the whole show is at risk.”

It’s been that way since the earliest days of the colony: the “ride on the sheep’s back” could have been a lot bumpier if not for Elizabeth Macarthur. While her husband, John, is remembered as the father of our fine-wool industry, she’s the one who looked after the family’s merino flock for almost a decade, while he spruiked the fibre in England.

Today, women are becoming more prominent in leadership roles within the agricultural industry. Kay Hull AM, AgriFutures Australia chairperson, is fostering entrepreneurship and investment in Australia’s rural industries. Fiona Simson, president of the National Farmers’ Federation, is a powerful advocate for the people working the land. As she has said, “Women have been intrinsic to the success of agriculture since farming began in this country, which was a significant time before 1901.”

A recent ABARES report noted that women pull in 33% of on-farm income and more than 84% of all off-farm income (and do the majority of unpaid domestic work). Despite women’s contribution to Australian agriculture, for much of last century, many were denied a formal education in the field. Until the 1970s, the bulk of agricultural high schools and agricultural colleges were for males only.

Now women are seizing the opportunity to study agriculture, taking on subjects that range from agribusiness to animal genetics. In 2016, the percentage of women working in the agriculture industry with a tertiary qualification was 47%, compared to the industry average of 45%.

One recent graduate is Alice Bowler, who finished the combined Bachelor of Agriculture/Bachelor of Business degree at the University of New England last year, and is working as an agronomist with AMPS Tamworth.

“I grew up on a farm just outside of Tamworth and I always thought it was a good industry to work in,” Alice says. The first in her family to study at university, she sees herself gaining skills through professional development that she can take back to the family farm one day.

“Working with farmers – helping them make decisions, not making decisions for them – has been really rewarding,” she says. “In these times you see the smart farmers who want to run their operations like a business rather than just a farm. They’re doing really good things to make sure they withstand the drought.”

In her work, Alice has found her expertise is far more important than her gender. “If you can show you’re just as good as anyone else in the industry, there’s not going to be an issue – there’s plenty of opportunity for women.”

“If you can show you’re just as good as anyone else in the industry, there’s not going to be an issue – there’s plenty of opportunity for women.”

Her experience echoes that of Amy Walker, an assistant farm manager at Breakfast Creek, a 3300-hectare property south of Boorowa, New South Wales.

Like Alice, Amy had enjoyed growing up on a family farm. “You always wanted to go out with your dad,” she recalls. “He’d be out building fences or chasing sheep, so you just kind of tag along – and that’s where you learn your basic skills that you need in the future in farming.”

It was only at high school that people questioned her passion for agriculture. “I was actually bullied by quite a lot of people back in the day because I found it was more interesting to be out drenching sheep than out getting drunk at the age of 16,” she says.

The schoolyard knockers didn’t dent her enthusiasm for the industry. Following Year 12 she worked as a station hand at Breakfast Creek for a year, where she returned after earning a Bachelor of Agricultural Science with Charles Sturt University.

“Once you’re in the industry, everybody is in the same boat, they live and breathe agriculture,” Amy says. “There are a lot of great people out there; they don’t care if you’re a female – if you’re willing to learn, someone will help.”

One thing both women had in common heading into the industry was supportive parents. It’s something Alicia Harrison would like to see more of. “When parents say ‘I don’t want my children to come back on the land,’ that really bugs me,” she says. “When we’re in such severe drought you can understand but I really hate the way it’s seen as a failing if that’s all you want to do with your life, to work on the land. I think it’s an admirable ambition.”

Alicia believes the calling is one to be celebrated: “To take on management of the land, sustaining that resource for future generations, is a really valid and valuable occupation. That needs to be held in such high regard.”