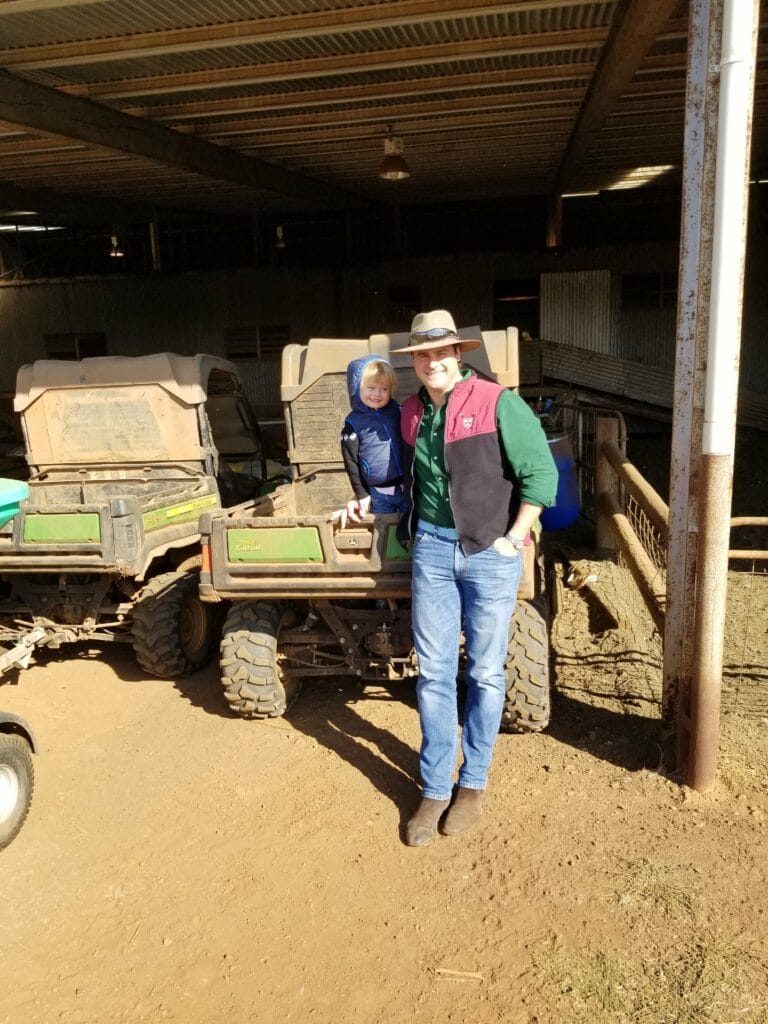 Going back to where it all began

Returning to the family farm during the COVID crisis has reconnected Chairman & Co-Founder, Justin Webb, with what makes AgriWebb so important.

Where the heart is

It’s a 13-hour drive from Sydney, where AgriWebb’s head office is, to Eddington Station, Victoria, the family farm of company co-founder, Justin Webb. Leave at dawn, and you arrive in darkness when car headlights catch kangaroos grazing by the roadside.

At the end of the day-long road trip, when the sealed highway has given way to a red-dirt road, Justin rolls down the car window and breathes deep.

His wife isn’t always so swept up in the moment. “Every time, it drives her crazy,” Justin concedes. “She’ll yell: ‘Wind up your window!’ Admittedly it does get very cold in the Western District.”

When Justin was growing up, his family moved every few years. Summers at Eddington became an anchor through his childhood. “My hero would be the manager or jackaroo riding around on a motorbike, chasing sheep, cattle and kangaroos. To a young boy, that was just everything you wanted to be.

“Now, I’ll wake up in the morning and go for a walk around the property. As I pass the cattle yards and the sheep yards, I feel connected again. This is where my roots are.”

Business as usual (aside from a few thousand livestock)

It was COVID-19 that brought Justin back to Eddington for his current stay. When AgriWebb decided staff should work from home, and before borders closed, he packed the family in the car and headed south.

“AgriWebb didn’t set out to have all these tools specifically so we could work remotely. They were already part of our infrastructure,” Justin says. “This isn’t just an Aussie business, it’s a global business. Even if I’m sitting in Sydney, we’ve got employees in London, Belfast or Denver, and the connection between everyone in the team has to work seamlessly.”

That said, his day starts a little differently at Eddington. Instead of grabbing a coffee at a local cafe, he’s helping round up a thousand-head of sheep, with his son by his side.

“He’s three, nearly four, and this is paradise,” Justin says. “Watching the sheepdogs, flying behind the flock and climbing over their backs as they get them in the yards – it’s amazing.”

“Working on AgriWebb from Sydney is fantastic because you’re right there with the developers, but you tend to get caught in spreadsheets, especially in my role,” Justin says. “You’re looking at the next sales number, the next product release, what’s driving those top-line metrics and then, frankly, trying to on-sell them to investors and stakeholders.

“Down here, I see our manager and stockman and stockwoman using AgriWebb on a day-to-day basis. They’re reviewing the feed in paddocks and checking inventory – the tool we originally conceived here is a critical part of the daily operation. And that is amazingly satisfying to me.”

Being on the farm also reinforces that, for all the uncertainties caused by COVID, farmers’ work is as essential as ever. “The animals don’t know the rest of the world’s in lockdown; they still need to be fed, and we still need to be out managing pastures and recording inputs – the life cycle of operations carries on. Otherwise, the shelves go bare.”

What has changed, is that advisors can’t visit the property. “So how do you maintain a continuity of insight, in this time of isolation?” Justin asks. “That has to be done online.

“10 years ago connectivity wasn’t ubiquitous. Farmers were slow to adopt smartphones, because, well, you’re not catching an Uber in the top paddock are you? Now digitisation of their own lives has happened – they have email, they’re online banking – and the digitisation of their businesses is becoming a reality.”

Reflecting on the team

It was at Eddington that Justin realised the considerable gains to be found by digitising farm record keeping. He was frustrated by the old way of keeping records – using pen and paper – and the lack of data to make informed decisions. “I knew a lot about business operations – having founded, built and sold three previous companies – and I couldn’t understand why we weren’t approaching the production of animals like a business – it’s still a business,” he says.

Reflecting on the company he co-founded, to build on the opportunities he saw, he’s quick to give credit to the people around him. “When Kevin Baum joined me on this journey, he couldn’t tell the difference of a sheep from a cow,” Justin jokes. “What he brought was this whole world I had no concept of, with best-in-class Silicon Valley SaaS techniques to drive and deliver scalable excellence to an industry.

“We have people with best-in-class skills, bringing them to an industry they’ve never worked in before, and it’s through to the newest of starters: Mel Novacan comes with insights from a decades-long career in digital marketing and building online brands, and Huw Davies has generations of farming in his blood, but he has never worked for a technology company.

“It’s that confluence of skills that makes AgriWebb a robust company and a robust product, as well as a phenomenally exciting place to work.

“People aren’t transferring their skills from, say, one banking company to another and claiming, ‘I’m going to change the world.’ No, you’re not: You’re doing the same thing, under a different logo.

“But walking around the farm, seeing the animals and the pastures, I realise we’re creating a technology that incrementally makes the production of food more efficient, more sustainable, and improves profitability.

“You’re improving such a core industry that benefits truly everyone. And I think that’s the best of technology: isn’t technology meant to make our society better? … If only I could get technology to convince my wife to want the window open!”

If you’re interested in Justin’s journey as he looks to drive the digitisation of agriculture, you can follow him at LinkedIn.