🇬🇧 So, Rishi’s in – but will that mean farming is out? 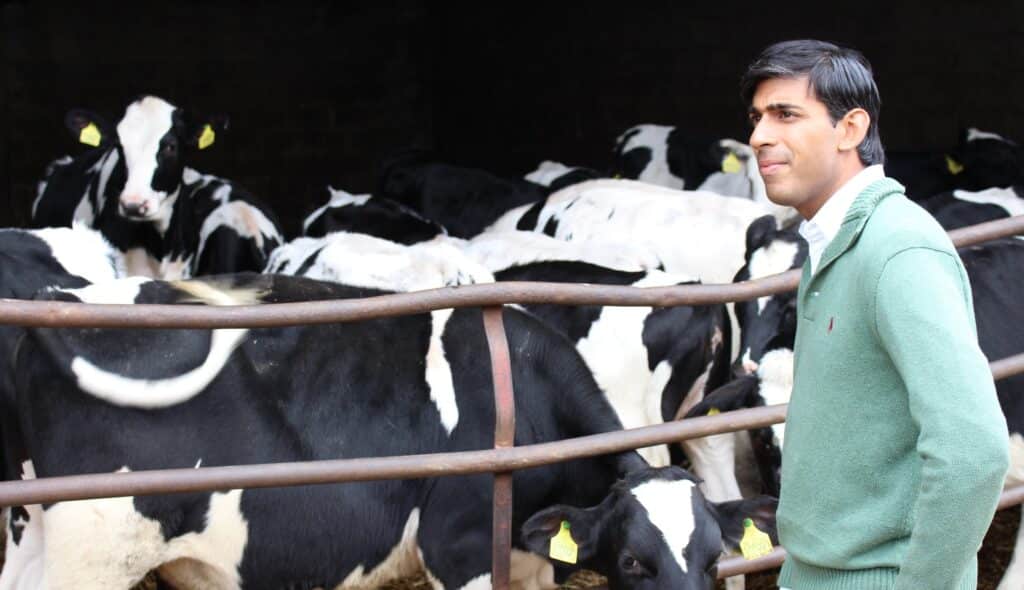 Another week, another prime minister. Rishi Sunak is the new leader of the United Kingdom, promising stability and unity.

One word we might have wanted to hear in agriculture, though, is clarity.

Farming has spent the last few years awaiting a clearer understanding of how the ELMS programme might work in reality. And as Stephen Carr makes his thoughts clear in a recent issue of Private Eye, ‘ELMS has been hijacked by wealthy landowners and environmentalist organisations who have secured 33 percent of the ELMS budget for about 3 percent of English farmland under its Landscape Recovery option’ (issue 1583).

Then, last week we heard that farmers are resisting investing in technology until there is more clarity. And if tech is the way forward to more efficient, productive and sustainable farming, can the government not invest in programmes that better support it?

The ELMS scheme itself was cast into doubt during Liz Truss’s short premiership. Although the scrapping of it was denied by DEFRA. And yet the NFU, amongst others, called for something that would better support feeding the nation.

Meanwhile, some organisations, including farming ones, protested at the purported move away from sustainability metrics. Regardless of differing point of views, everyone was seeking clarity.

In one of her local radio interviews (54’25”) , Liz Truss mentioned that an announcement was imminent around farming. And that it will support the nation’s food supply. Alas, it never arrived. And here we are with a new prime minister and still no idea where the focus will be and how farmers may be supported.

So, will Mr Sunak be pro-farming?

In an archived message on the Conservative Party pages, Rishi declares that he is standing up for British farmers. And he backs local produce. But that was before Nitrogen prices were soaring and Britons were facing rapidly escalating prices for basic foodstuffs.

Back on 19 June, Rishi attended a question and answer session with then farming minister Victoria Prentis. Both ministers extolled the virtues of ELMS, saying they were supporting farmers by phasing out the BPS payments slowly. And the scheme very much supported the need to feed the nation, but in a sustainable way.

On 13 August this year, as part of his leadership campaign, he tweeted that his plan for drought would include a better water infrastructure that would benefit farmers. And on 19 August he promised his full support for farmers in order to feed the nation.

Will Rishi focus on the environment or food supply or both?

A recent article in FarmingUK states that farmers need to invest in technology to be more productive and sustainable, but they need the support to be able to do so. And they lack the clarity about the future.

We are possibly not any better informed north of the English border either. Although both Truss and Sunk promised to support rural life in their perspective leadership bids in August.

According to the report, Sunak has stated that, ‘[farmers] – and our wider rural communities – are part of the solution to the environmental challenges we face, not the problem’.

Reports in Welsh media suggested, during the leadership contest in August that both candidates could not be that supportive, given the trade deal that had been put in place with Australia. Although Mr Sunack criticised that deal previously as being unsupportive of British farmers and local produce.

Where will the investment in farming land?

We do know that Rishi is going to cut back government spending. Where that will be isn’t clear yet. Will farming be part of that? Less than two hours after Rishi Sunak became the third prime minister this year, the Farmers Guardian released an article imploring for cuts not to be made to farming. We know that Rishi has repeatedly said he will support farmers and ensure that the nation is fed. That was part of his leadership spiel, so will that have changed?

Previously, Rishi said he thought the Common Agricultural Scheme and its linked payments were unhelpful to farmers. So, rumours over the last few weeks to a return to a similar scheme seem unlikely.

The Guardian speculates that Rishi is likely to largely keep the ELMS scheme the way it was laid out. He will work to undo the difficult relationship the Truss administration quickly built with environmental groups. According to the article, Victoria Prentis, no longer a farming minister, said that Rishi, ‘really gets farming’. But of course, that is quite a broad and vague statement to make. However, that was echoed in this video in August. In it he is pitched as the ‘right choice for farmers’ as part of his leadership bid. Rishi states, ‘I will drive forward the most significant reforms to farming in half a century. Not only that, recent events have demonstrated the importance of domestic food production and the national resilience that it gives us. I will put a renewed focus on it – and ensure that we are supporting our farmers to boost production’.

And with the appointment of Thérèse Coffey this week, as Environment Secretary, it is hard to know exactly where she will stand. She has worked as a minister with DEFRA and is an MP for a rural community. She has a background in the Fast Moving Consumer Goods (FMCG) sector. In the past she has welcomed green initiatives, but she has also been clear that she sees a need choice over what we eat.

Under George Eustace there was a promise of investing into technology for farmers as part of the food strategy. And given Rishi is keen to ensure stability, as well as his promise to reform farming, it might be no surprise if that surfaces as part of future plans.

AgriWebb is here to support you

Whatever future policy brings, AgriWebb is here to support farmers in the UK and around the world. Find out here how we can help you with your profitability goals to move your business forward.